Businessman of the year 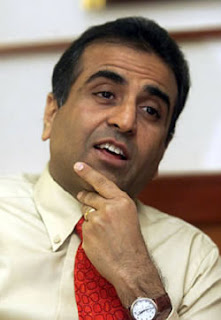 From the latest newletter of India Brand Equity Foundation I learnt that Fortune Magazine named India's Sunil Mittal,(Founder and CEO of India's leading mobile company, Bharti Airtel)as Asia's Businessman of the Year.That was a greattttttt news .For the fiscal year ending this March, Bharti Telecom is expected to report revenue of more than $4 billion .
How did Mittal get there ? He did this by using quintessentially Indian solution - outsourcing. Yes by outsourcing! .What's truly innovative about Bharti's approach is that it reverses the stereotype about outsourcing !!Mittal outsourced operation of Bharti's entire phone network to Sweden's Ericsson, Germany's Siemens and Finland's Nokia . He outsourced the bulk of Bharti's information-technology services, including billing, management of customer accounts and even operation of the Bharti intranet to IBM.Mittal says he never seriously considered solving his growth problems by partnering with Indian firms. "It is very hard for two Indians to partner well.".I am really dissapointed that he did not consider Infosys or Wipro (or any other Indian IT firm) to take care of Bharti's IT needs .It would be really interesting to see some succesful mega partnership between two Indian firms and prove Mittal wrong :)
Posted by Unknown at 1:41 PM