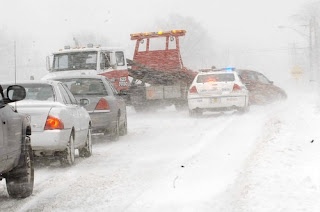 The snow that has hit the Chicago today is a rare occurrence and already ranking as "one of the largest February snows in history," with additional accumulations on the way . I just came back from O'hare airport...All the main streets were drivable but it was very tough to get to those side streets. More than 900 flights had been canceled throughout the day at O'Hare International.My brother is flying from Chicago to NY today and I am trying to track his JetBlue flight which is already delayed by over 6 hours.
It seems people put chairs in the streets of Chicago to hold parking places during the blizzard of 1967 :)
Posted by Unknown at 12:26 AM